With MCQs, is it required to to set a number of Attempts, or can that field be toggled off?

Hey! Sure - in BEHAVIOUR settings you can set attempts to 0 and turn off the attempts counter. that will mean attempts are not shown or counted. 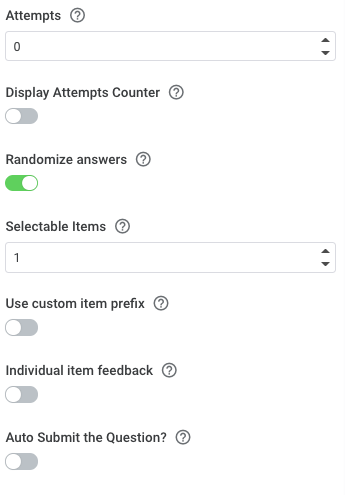 Thanks for your quick reply and the guidance. When I set attempts to 0, turn off the attempts counter, and leave “Auto submit the question?” toggled on, there’s an issue. If you answer the question incorrectly, it doesn’t auto reset the question. The user is stuck on the question with no option to select a different answer.

Is there a way to have this auto reset feature work when a question is answered incorrectly?

Ah in that case you just want to set the number of attempts fairly high but just turn off the display number of attempts toggle so you’re able to show the reset button, they can try again but they can’t see how many attempts they have? Does that reflect what you want?

Yeah, that will have to do. I was hoping that we could have the question still auto-reset if the user gets it incorrect, instead of them having to manually reset the question each time.