A question about the confidence slider.

Does it have to remain numerical? Can you change the set up so that it shows say, three stages - Not difficult / Difficult / Very difficult and the learner can slide to their choice? Or does it have to stay numerical and I attach meaning to those numbers?

I recently wanted to add three stages too, but I don’t think it’s possible. So I’m commenting here to see what anyone else says. You can change the labels for the minimum and maximum ranges though, like so:

Is this what you mean?

Yes, that’s what I mean but I want a middle stage too! Let’s hope someone answers…

Thought I’d tag @Sam_Cook_Evolve_QA just in case they can help!

Hi, I’m afraid it’s not currently possible to have a named middle stage on the scale of a confidence slider.

Can I ask then - I found this visual of how (in another authoring tool) someone posed a similar question without using a confidence slider. If I wanted to create this look (three boxes with text) would I be able to do this in graphic mcq or mcq?

Thanks and apologies for being obtuse!

Hi, you could achieve an approximation of that with an MCQ or GMCQ. Set the answer options all to be correct (so it’s not treating any response as incorrect). The learner will still see a tick that’s associated with their answer. Under appearance set items per row to 3. If you want the user to be able to change their answer set a number of attempts. Make sure not to include the question in any assessment marking if that’s a feature of your course.
I had a quick test and I couldn’t see any issues, but bear in mind that’s not what MCQ/GMCQ are intended for, so you would have to have a test to check there aren’t any implications I haven’t discovered.

You could take a look at the Survey component too - and get them to give you a star rating for their confidence level?

This is why I love the forums. Based on @Watersedge1’s query and Sam’s answer, it made me think of Check box groups and in turn Radio button groups.

Here is an example of a Radio button group:

You can save the user’s answer to a variable. 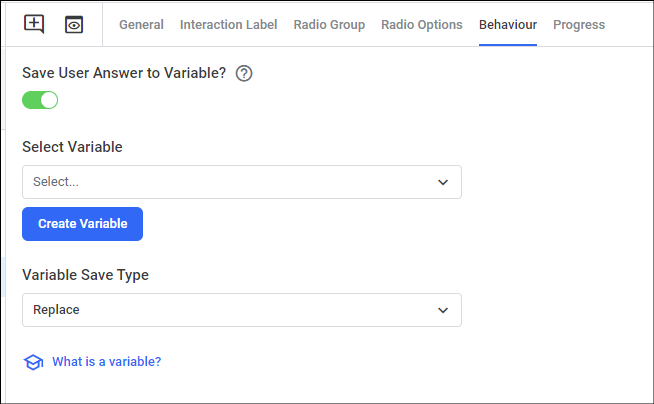 Using triggers, you should be able to show dialogue popups too if you wanted.

Hi @BarryBPS - thanks so much. You’re obviously a developer, I’m not at all!

What component have you created this in - need to give instructions to a designer - is it MCQ/GMCQ as Sam suggested?

I also have no idea what a check box / radio button group is!

And this way, can it trigger generic feedback?

The component is called a Radio Group

Then add your options here:

Nice one Barry, I reckon radio group might be a better fit than MCQ/GMCQ

I think I’ll use it myself, as up until now, I haven’t

Thanks so much, Barry!

HI @Sam_Cook_Evolve_QA It is possible to save the choice made in a Confidence Slider to a variable?

I think I need to use my Radio Button Group suggestion in a course of mine, as I cannot see how I can save the choice made in a confidence slider to use elsewhere.

I want to show/hide content in a course based on a learner selecting 8 or more in the confidence slider, but I don’t think I can do this.

Hi Barry, you can’t with the confidence slider, but you can with the Slider Input component. You can rename the labels at either end of a slider input, (eg you could name them ‘Not very confident’ and ‘Very confident’) but you would have to have a numeric answer, and that’s what would be saved to a variable. You could still use Logic with the saved variable to do what you are suggesting (I think)
Cheers-Sam